With the lockdown, I have been forced back to the bench and blog, I have not given up just had no time and will be dragged away again, but no reason to finish up a project or two.

Let's look at a sound-equipped S wagon to examine what may be possible. 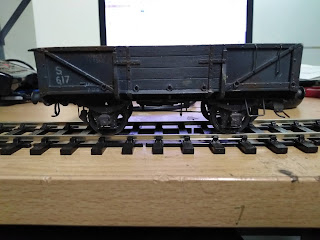 The Soundtraxx SoundCar was selected over a custom ESU with its superior logic and function mapping. Overall a Soundcar supply enough sounds to do a decent job imparting realism to rolling stock plus it's magnetic consisting makes the building of a train relatively simple and prototypical.

The biggest issue if not using a Soundtraxx engine decoder is the ESU must default to on at startup because F8 must be hit four [4] times to place the Soundcar decoder into consist mode, if F8 is on for locomotive sound you will end up with the locomotive sound off and the train on with no way to have both on. Also if using magnetically operated couplers the wand has a dual purpose to open and close the couplers and operate the consisting of the train.

One advantage of these decoders as they use voltage to determine the speed of the wheels, while a disadvantage in a locomotive there is no requirement for a motor to supply the necessary feedback. Synchronization is not important so any disadvantage of this methodology is not apparent, overall a win-win

The car shown is a Waratah S wagon that was built to the manufacturer's instructions. A small amount of urethane was removed to facilitate the decoder and stay alive installation. If you wanted to do more than one this preparation would be best done before installing the wheels. 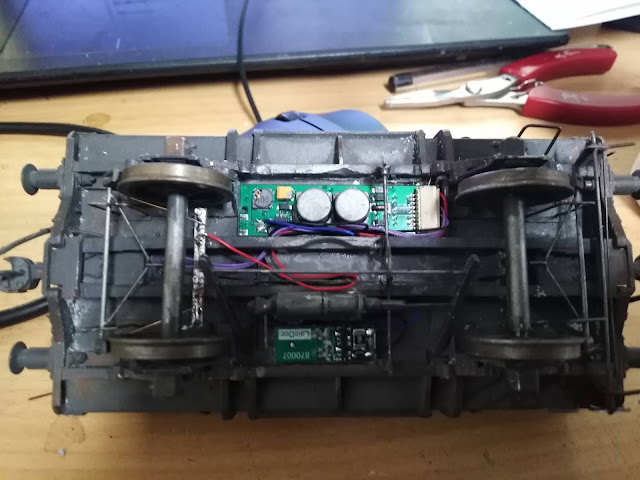 Both the decoder and stay alive had their insulation removed to reduce their profile from the viewed area but the underside will make a purist be apoplectic but in the end, it's modelling theatre and here sound adds so much to the theatre.

Pickups were manufactured using 0.015'' phosphor bronze wire soldered onto copper-clad PCB which was pinned/glued to the frame and necessitated a stay-alive be installed.

This car is also equipped with a trialled tripod suspension system yielding a practical solution to the levelling of 4 wheel rolling stock. The Tripod is a post with a pivot and tube that holds the wheelset axle and is fixed to the car floor allowing this wheelset to roll latterly using brass guides fixed to the axle boxes faces to keep the axle aligned in the vertical and laterally.

More details are to be found at the end of the Model RR Craftsman Vlog 1 on Rumble.

Why Rumble well the others are just too powerful and I find them morally objectional.